Let me introduce you to smooth and creamy chestnut soup.  This version is more like a bisque, dressed up with butter, cream and a little booze. But I know, I know.  It’s brown.  You can dress it up, with chopped green onions and crème fraîche, I’ve done here, and talk it up as I’m doing now.  But at the end of the day, this soup is still brown.  But still good!  Made with chestnut purée which I’ll talk about below.  And also made with butter and cream.  But first…

A Chestnut Primer: The Bread Tree

Italians have called the chestnut tree the Bread Tree because its fruit has provided them with a steady and staple food source.  For centuries chestnuts were cultivated by villagers along the Appennine mountains. Roman legions spread them throughout Europe during their campaigns.  Chestnuts could be ground into a meal and turned into a high-starch bread, high in vitamin C, that resisted spoilage.  Over the years the Italian chestnut has run the gamut from being at the top of the food chain as a delicacy for the aristocrats to the bottom when it served as subsistence food, cucina povera, for the poor or war-ravaged population.  Apparently polenta was first made with chestnuts until corn was introduced to Italy from the New World.  Italy is one of the largest producers of chestnuts and exports them to the U.S. where they have surged in popularity. Chestnuts can be roasted, candied, folded into sweet desserts and stuffed into fowl.  And honey from chestnut pollen is delicious.  In a nutshell, the chestnut is back!

[Note: The pictures below show a blooming chestnut tree in my Virginia neighborhood. This is one of two trees not far from me, which is very unusual.  American chestnut trees were mostly wiped out a century ago in a massive blight.  But they are making a comeback thanks to the hard work of the American Chestnut Foundation is to revitalize the crop by planting an American/Japanese hybrid that is hardier than the original.  My husband has worked with the foundation to plant about 50 saplings on our property in rural Virginia to help the cause.  Learn more at the foundation’s Web site at acf.org.] 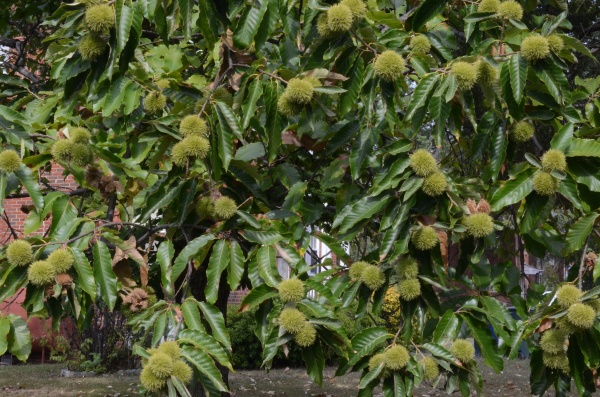 Here’s a closer look at the chestnut burrs. Ever get the idea they don’t want anyone to touch them? 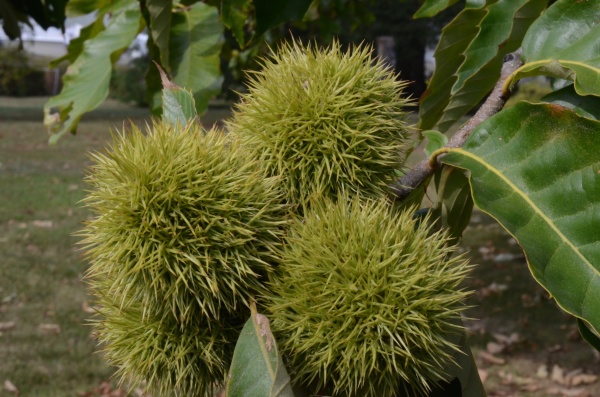 When opened, this is what the chestnuts look like.  I had to use oven mitts to handle these.  Ouch.  I wonder what the Roman legions used to open their chestnuts? 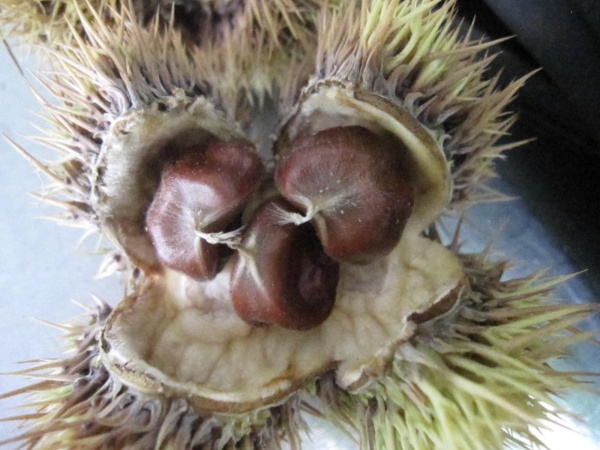 When sold at the grocery store in the U.S. in the fall and winter, they look like this. 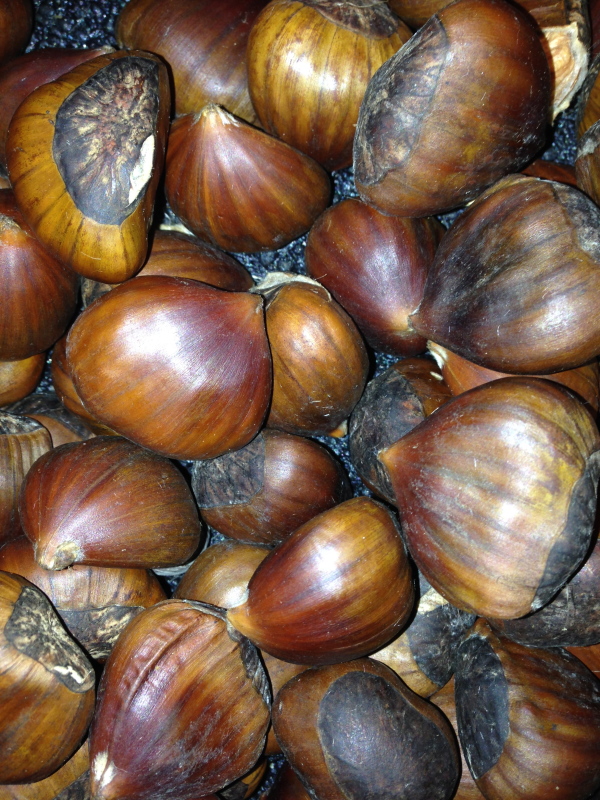 This is Marco selling roasted chestnuts on the Via Condotti in Rome on a balmy day in very early spring.  In fall, winter and early spring, Italian street vendors use a large, perforated brazier to roast the chestnuts.  Then they serve them up in little paper cones.  They’re so delicious.  I wonder if the ladies popping out of Dior then patronize Marco’s stand–if they have any money left. 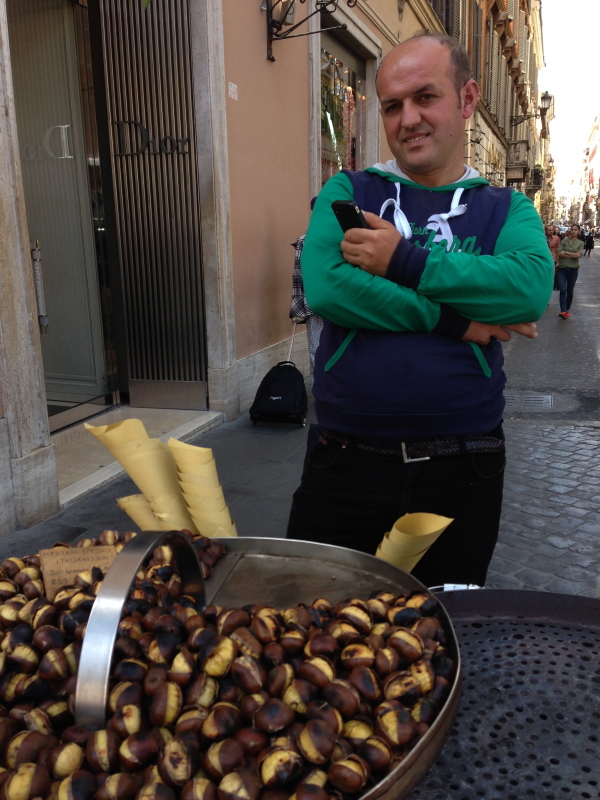 Here’s a closer look at Marco’s chestnuts.  They are marrons, juicier and sweeter than the more simple castagna chestnut.  The castagna contains two small chestnuts inside the burr but the marron has one large, elliptical nut.  The Italian government has awarded them an IGP, or a “protected geographical indication” seal of approval. 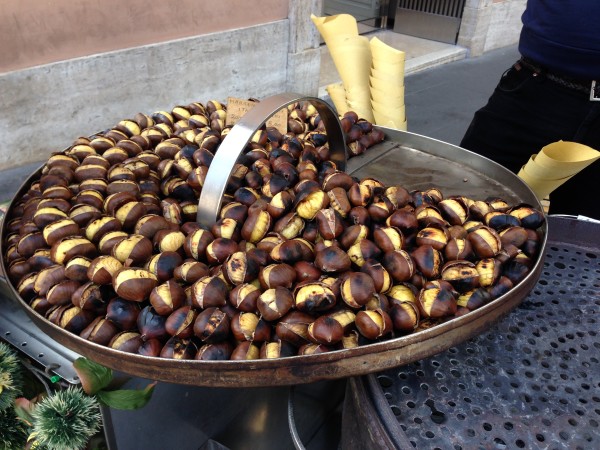 If you love an Italian sagra, visit the area of Mugello, north of Florence, in October.  The town of Marradi holds a month-long chestnut festival celebrating its world-renowned marron.  During the festival, special steam trains transport visitors from Florence to Marradi and back.  Pack your appetite.

Back to Creamy Chestnut Soup

I’ll admit that chestnut puree made from marrons is not easy to find.  Specialty stores sell them but I ordered mine on Amazon.  It’s not cheap either.  About $10 a can.  It’s a splurge but worth it once in a while.  Especially if you use Amazon Prime! 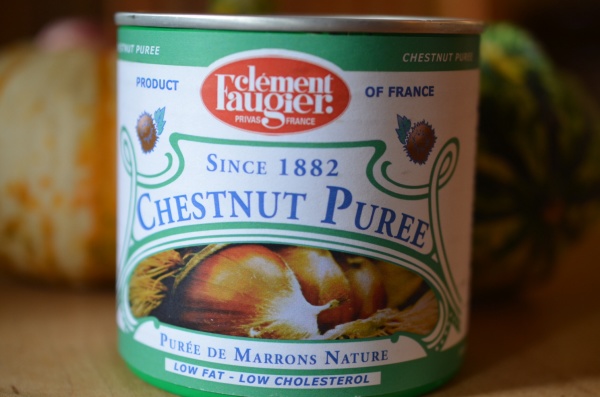 The puree is thick in the can and has to be coaxed out, like jellied cranberries.  Sitting next to the puree is a key ingredient in chestnut soup: heavy cream. Yum. 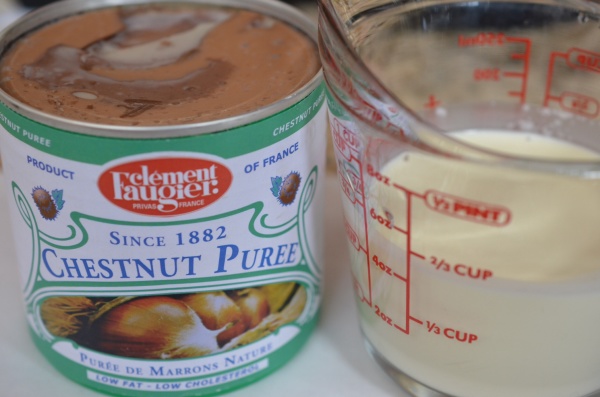 In the pot below, the aromatics are sweating in another ingredient that gives this dish a flavor boost…lots of butter. 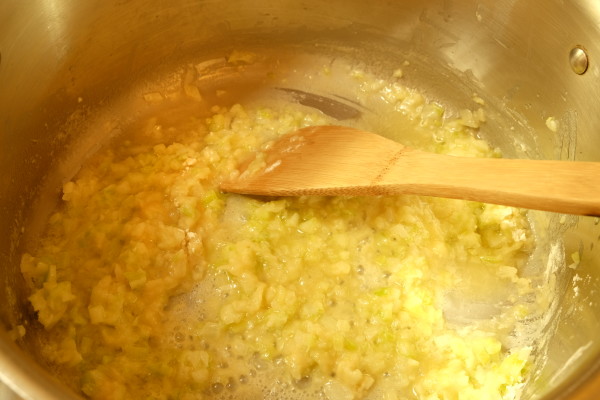 A little flour, the puree, broth, cream and a splash of sherry and you’ve got a great soup.  Enjoy. 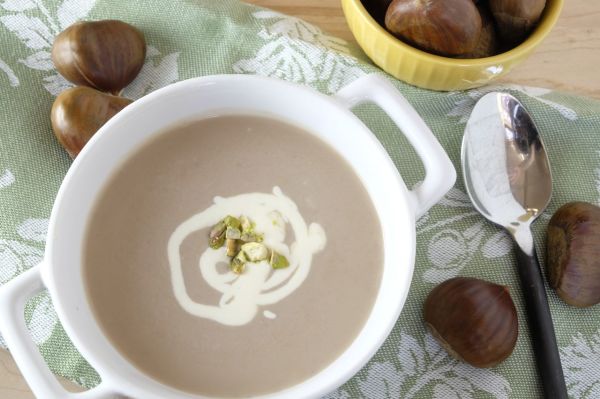