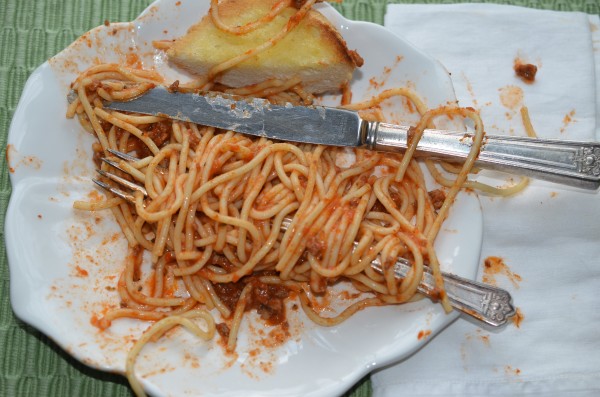 I published a version of the article below, How To Eat Spagetti, many plates of pasta ago. I  had a lot of fun writing it and, judging from people who contacted me, they had a lot of fun reading it. So here it is: a primer on how to eat spaghetti.  Do you recognize yourself?

When I was a kid, my father, a first-generation Italian-American, loved spaghetti so much, my mother had to serve it as a main course twice a week. So she did: Sundays and Tuesdays. I don’t know why the days weren’t spaced out more: Sundays and Wednesdays or even Thursdays. But there we sat, gloriously lapping up pasta twice a week two days apart. Italian nirvana. I sat to my father’s right, and twice a week, without fail, I somehow splashed spaghetti sauce on his starched white shirts. Expletives flew, English and Italian. He finally wised up by coming to the table wearing just a white T-shirt. Like an Italian Stanley Kowalski. But splat…the t-shirt also got it. I was punished. On spaghetti days I was banished to the other end of the table, where my mother eventually found red sauce speckled on her white lace curtains.

I had accomplices. After spaghetti meals, my brother had to be lifted from his high chair straight into the bathtub to be hosed down. And, once, my father discovered red sauce stains on the ceiling above my little sister’s chair. Quite a feat.

So let’s face it. Spaghetti eating, for a kid or an adult, can be awkward. I always assumed, before leaving home, that eating spaghetti and looking graceful were two mutually exclusive ideas until, as a (self-described) sophisticated adult, I moved to Italy, where spaghetti-eating exists in a state of refined grace.

While living in Rome, I noticed that, mysteriously enough, the Italians did not slop sauce on their chins, splash their silk and gabardine or deposit embarrassing puddles on the tablecloth. In fact, most Italians I met consumed spaghetti as gracefully and skillfully as their forebears composed opera and carved marble. Even more awe-inspiring, I noticed, was their ability at the same time to charmingly discuss, say, their latest coalition government–or the latest sale on cashmere 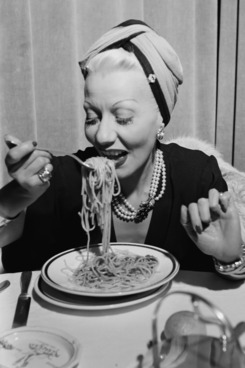 That was the conversation topic the first night I dined out with my new Italian friends. While they chattered away, I wanted desperately to contribute to the table talk. Ah but, I was too busy fooling with my food and hoping my friend Alfonso wouldn’t notice the sauce stain on the tablecloth next to his plate — was a projectile sauce stain from my plate.

Obviously, I needed work on my bella figura. So I enlisted the help of a Roman friend, a true spaghetti-eating aficionado. After dragging myself to Italian restaurants day after day to practice (oh the horror), I finally mastered the fine art of eating spaghetti. Once I became a pro, I have to confess, one of my greatest amusements was watching tourists, many of them American, tackle a mountain of pasta with uncompromising ineptness.

If you plan to visit this most voluptuous of countries, I say learn to do well what you will inevitably be doing every day. Once you’ve mastered the technique, like riding a bike or tying your shoes, you will never forget.

How Not to Eat Spaghetti

First, recognize what you are doing wrong. I classify amateur spaghetti eaters into five distinct categories: the Suckers, the Scoopers, the Slicers, the Snake Charmers and the Around-the-Worlds

1. The Sucker fastens a strand inside his mouth and slowly sucks away until the end comes dancing up to vanish inside. The bold ones suck up more than one strand at a time. This is dangerous for the chin, especially if the spaghetti is wearing meat sauce. So, eventually, will the Sucker. 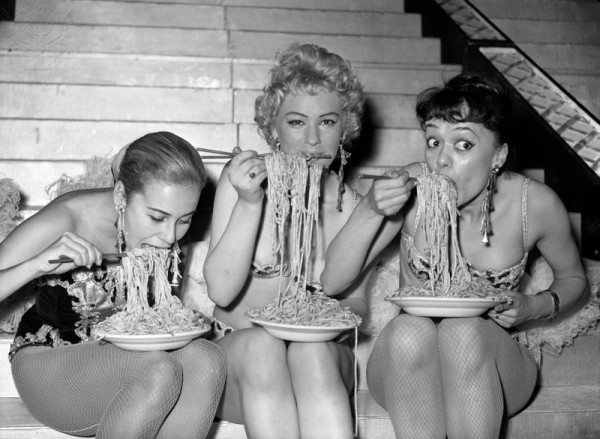 2. The Scooper has no known methodology. Catch-as-catch-can, he just digs his fork into the folds, leans down close to the plate and shovels it in like coal to a bin. This manner lacks finesse, to say the least. It is strictly cafeteria-style and out of place in any restaurant, let alone a Roman trattoria. 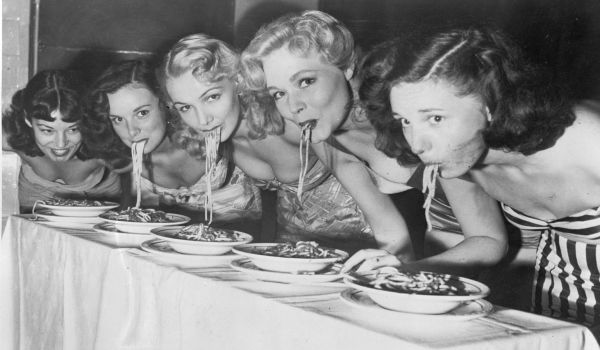 Don’t try this at home.

3. The Slicer is a coward at heart. Unwilling to meet the demands of creatively using utensils, the slicer simply lays his fork on its side, mashes off a few stubby ends, scrapes them onto the fork, then into the mouth they go. An Italian would rather hear nails scratch across a blackboard than watch this sacrilege. 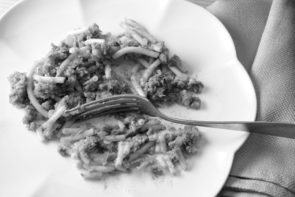 4. The Snake Charmer resembles the Sucker, but the technique is reversed. The Snake Charmer anchors strands of tangled pasta onto the fork and hoists them into the air. The lower jaw juts out and the pasta is sucked in from below. The hazard here lies in corralling the swinging ends into the mouth. The Snake Charmer often and unknowingly wears spaghetti tracks across her cheeks. 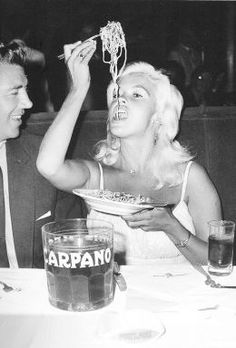 5. The Around-the-World is the silliest of the lot. This method is not just awkward, but foolish. He mindlessly winds the spaghetti onto the end of the fork until a wad the size of a tennis ball engulfs it in a death grip. Before you can say mama mia, he has twirled the pasta up his wrist and halfway up his arm. The Around-the-World contributes little to the dinner conversation. He’s too busy trying to extricate himself. 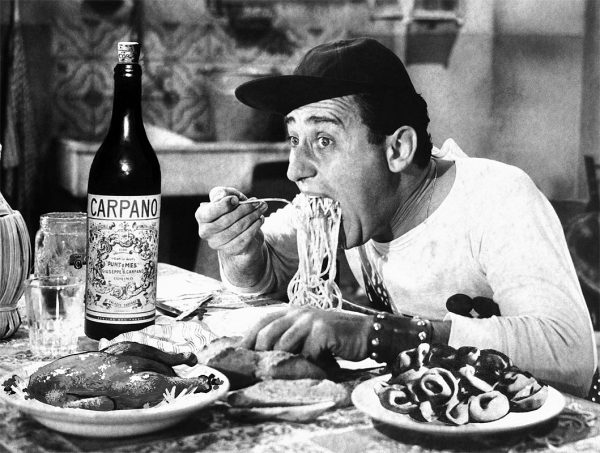 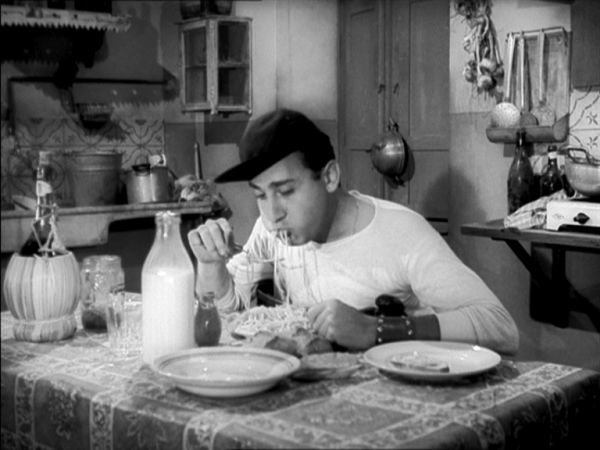 The great Alberto Sordi in “An American in Rome”.

So now, are you ready to join the pros?

How to Eat Spaghetti: Some Pointers

This one is simple, elegant and my personal favorite. Lay the fork on its side on top of the pasta with the handle resting between thumb, index finger and middle finger, as if holding a pencil. Grab three strands – no more, no less – and slowly twirl away from your body. With the strands loosely wound up, simply lift the fork and head it home. No muss, no fuss with the vertical thrust. As you deftly engage in dinner conversation, learn to sneak surreptitious looks at your fork, the same way you glance at your watch at boring parties.

This technique combines spoon and fork in harmonic unison. The trick is to put some pasta on a fork held in one hand, grind and wind the fork end into the middle of the spoon held in the other. Skillfully done, the pasta automatically winds around the fork like thread onto the bobbin of a sewing machine. I’d always had mixed feelings about this method – Italians are generally on the fence – thinking the spoon superfluous. Then one day I saw a group of aristocratic-looking Italian Parliament members very stylishly eating their spaghetti this way while, no double, discussing important affairs of state. They were, in fact, as I walked past their table, discussing their second course. To spoon or not to spoon, then, remains a personal choice.